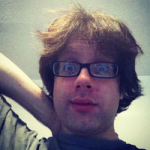 Nick Bryan is an author from London, UK, who writes mostly dark-comedy genre material. He has stories published in a few online venues and a couple of anthologies. His first major work to go out there for public consumption is the weekly comedy-drama detective serial Hobson & Choi on Jukepop Serials.

When not writing, he enjoys comedy, television, a nice white beer and board games. More details about Nick Bryan can be found on Nick Bryan Dot Com . In case there is any doubt, he is writing this about himself in the third person. What a ponce.

Find Nick Bryan on the InternetEdit

Out of his own website, here are some other places you can follow/friend/stalk/like/interact with Nick Bryan.

Retrieved from "https://writenow.fandom.com/wiki/User:Nick_Bryan?oldid=4430"
Community content is available under CC-BY-SA unless otherwise noted.