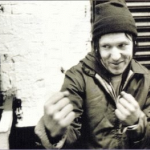 Lerfish is a male Engineer from Edinburgh, Scotland. Born in 1992 he began writing in his early teens. Concentrating on poetry he gradually improved his writing skills but never managed to complete any of the stories he attempted. Driven by a desire to write the novel he always knew was inside of him he still to this day attempts to piece together a cognitive storyline once every few years. In the mean time, his various poems suffice as a means of output.

Ironically Lerfish is not an avid reader of poetry. Driven by his true passion in life, Music, reading is a secondary hobby for Lerfish. He was a keen reader as a child but due to a fairly drastic life change at the age of 11 his reading habits died out almost entirely through his teens. However at the age of around 15 or 16 he slowly, with the encouragement of close friends, began flicking through the pages again. Almost every book he reads and every piece of music he hears influences him in some way or other. However, Lerfish's main sources of inspiration are mother nature and the nature of mankind as an individual and as a species.

Lerfish wrote his first poem at the age of 12, propted by a school task to do so. His peers and superiors were so impressed with what he produced that he was honoured with a invitation to a one to one meeting with his then headmaster. Unfortunately due to his age and life circumstances, Lerfish never thought to pick up the pen again until he was seventeen. However, once he rediscovered his talent, nothing could stop him. The following year he wrote 7 poems (of significance) and 11 the year after that. Admittedly his rate of output slowed after this initial rush however he continues to revisit poetry writing annually.

Lerfish has expressed his burning knowledge that deep inside of him there is an epic novel and over the years he has attempted to put it on paper numerous times in various forms. However the level of expression he feels inside of him far exceeds his current writing capabilities and Lerfish has never got far before giving up through disappointment at his writing's lack of emotive stimulation. Perhaps one day he will learn to power through this odd writer's block to complete a novel or short story. Although he is aware that doing so would drastically improve his writing skills he still struggles to overcome his inner critic to the point of finishing and publishing any piece of prose.

Retrieved from "https://writenow.fandom.com/wiki/User:Lerfish?oldid=5438"
Community content is available under CC-BY-SA unless otherwise noted.