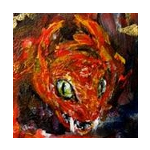 Good evening (or whatever time you're reading this). I am Andrew Johnston, once and future writer.

I originally come from a small town in Kansas that's just big enough to appear on a map and, startlingly, have its own Wikipedia page. If you've ever driven cross-country through the Midwest, you may have seen it. I developed an interest in writing in high school, mostly due to a very unfortunate wannabe activist phase.

I was involved in collaborative writing projects on various internet forums, and I also maintained a blog of my thoughts. It was about as profound as you'd expect from a 16-year old, but it was enough to land me a gig at Political Strategy, a group blog that was popular for a brief period during the 2004 election cycle. Most of the writers were older - I was their Gen-X connection (I've since become a Millenial, which is odd in that my birthday never changed). During that period, I also became a staff writer for a browser-based game that, sadly, got stalled out in a pre-development phase and has yet to come out. It was then that I promised myself that I would eventually write for a project that actually saw the light of day.

After college, I took a job teaching ESL in the People's Republic of China - first in Changchun in the north, and later in Suzhou in the Shanghai area. It was easily the most challenging episode in my life, but it was also the happiest I've ever been, if only because I discovered that I could write about things other than politics. I maintained the obligatory ex-pat blog which eventually inspired my first book, Kingdom of Sharks.

What I'm Up ToEdit

You can find my writings in a few places.

Retrieved from "https://writenow.fandom.com/wiki/User:D_Johnston?oldid=4969"
Community content is available under CC-BY-SA unless otherwise noted.